MORLEY, Iowa—Linda Jackson endured more than her share of heartache in 2017.

Her partner was diagnosed with liver cancer.

A few months later, she moved her mother-in-law into a nursing home.

And just one week after that, her partner, Tom, passed away.

The bills began to mount. And with one less income, the Morley woman became buried in debt. She resigned herself to the real possibility of selling her home to get out from under it. 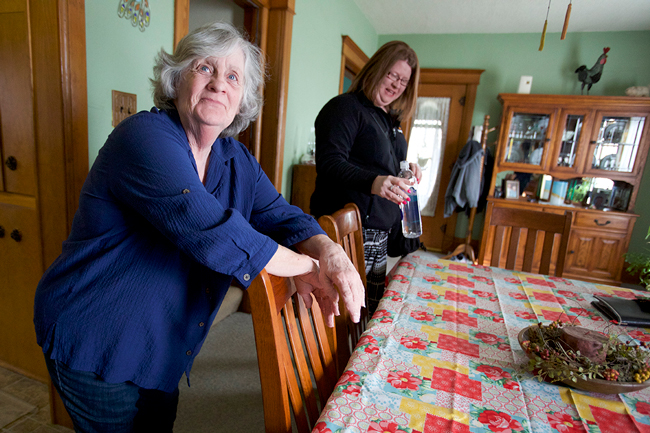 Dupaco member Linda Jackson with Dupaco representative Jacki Clasen during a visit to Linda’s Morley, Iowa, home on March 16. During an on-site education event in Anamosa, Iowa, earlier this year, Dupaco helped Linda Jackson save $20,000. This helped ensure she can keep her home after the death of her partner, Tom, last year. (M. Burley photo)

“After he passed away, all this stuff started coming in,” Jackson said. “I didn’t have the cash and had to use the credit cards and got myself into trouble. But I didn’t know what else to do at the time.”

A light at the end of the tunnel

Now there’s a light at the end of the tunnel for Jackson.

Dupaco’s Jacki Clasen followed up with Jackson and created a plan to consolidate her high-interest debt with a home equity line of credit—saving her more than $20,000 and allowing her to keep her home.

“I like where I live. I like the town I live in. And I’m not old enough yet to give all this stuff up,” Jackson said. “I’ve got to have this activity to keep me busy. I didn’t want to go to a little house with a little postage-stamp yard. Besides that, the dog told me he didn’t want to move. He likes his yard.”

It was the first time Jackson had worked with a credit union. And the financial cooperative helped her more than she thought possible. She has since made Dupaco her financial home.

With more financial stability again, Jackson has plans to move forward with some home improvement projects.

Helping members like Jackson is what the cooperative is all about, Clasen said.

“People need to be treated with respect,” she said. “When we go above and beyond to show someone they matter within the world and within the credit union and show them it’s not a lost cause, it makes me feel like I’m doing my job and living up to Dupaco’s mission.”