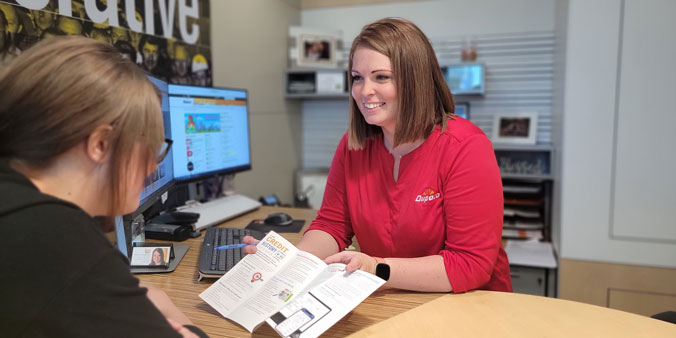 Dupaco’s Amy Meyer helped members Deanna and Rod Frank create a plan to start building their credit and paying down debt so they can reach their goals. (A. Rexrode/Dupaco photo)

Medical issues had forced Rod to cut back on his hours at work. And with less money coming in, the Manning couple used credit cards and expensive loans to help cover expenses that still needed to be paid.

“We had gotten into a big bind and couldn’t get ourselves unburied,” Deanna said.

The right message at the right time

It was around that time when they heard about Dupaco Community Credit Union’s free Money Makeover service.

It couldn’t hurt, they agreed.

The Franks met Dupaco’s Amy Meyer at the Carroll Learning Lab. And the three of them got to work.

The Franks talked about home improvements they’d like to make. They reviewed their monthly expenses, credit scores and debts. And they created a plan to start building credit and paying down debt.

Meyer also put them in touch with Dupaco Insurance Services. By moving their insurance to Dupaco, the Franks significantly cut their premium payments—freeing up money in their budget.

“You would be amazed at where you can find savings,” Deanna said. “It puts it in perspective where all of your money is going.”

They’ve stuck to their plan. And they’re reaping the benefits with higher credit scores, less debt and more savings.

Eventually, Deanna would love to remodel their house to make more room to host their growing family, which now includes five grandchildren.

“It does take self-discipline,” Deanna said. “But we started turning things around. And it feels good. We have the flexibility to replace something if it falls apart and not worry about how we’re going to pay for it.”