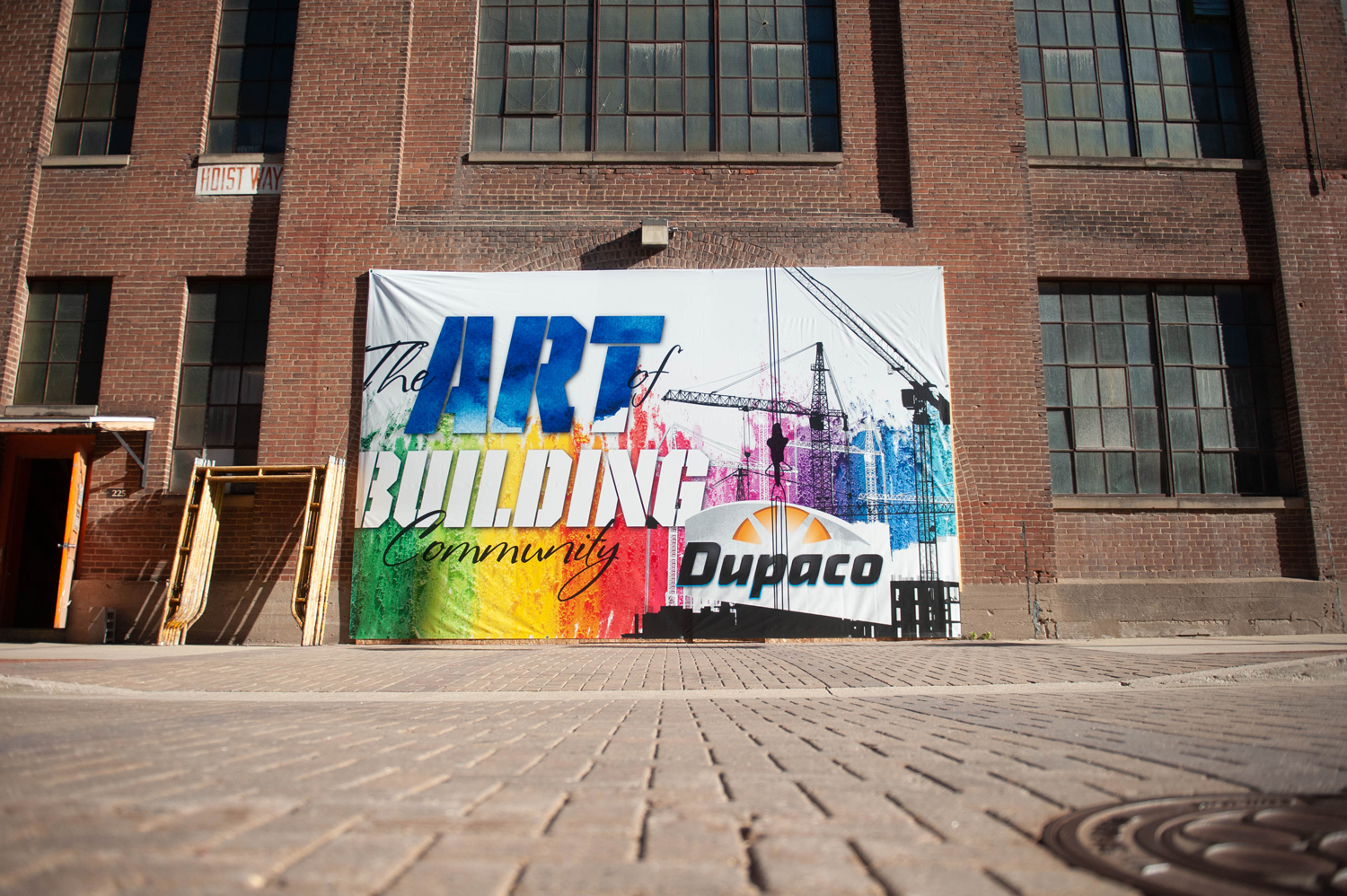 Join Dupaco as we celebrate the power of art to transform and connect community—and reveal the Dupaco Voices Archway. (M. Blondin/Dupaco photo)

Dupaco will celebrate the power of art to transform and connect community Thursday, June 13, during the Dupaco Voices Archway Opening at the site of the financial cooperative’s future operations center, 1000 Jackson St., Dubuque, Iowa.

The community is invited to the celebration, from 5 to 9 p.m. in conjunction with Millwork Night Market, with a brief program at 5:30 p.m. Event speakers include Dupaco President and CEO Joe Hearn, Pink Lady artist ZorZorZor and Gene Tully, one of the originators of the Voices from the Warehouse District art shows.

The credit union’s future operations center will be located in a vacant manufacturing building, previously known as Voices, in Dubuque’s Historic Millwork District—the neighborhood where Dupaco was founded. Paying homage to the five-story structure’s artful and historic past, the financial cooperative named the structure the Dupaco Voices Building.

As part of the revitalization project, and in coordination with the artist, crews deconstructed the Pink Lady artwork that had closed off the original pedestrian corridor connecting 10th and 11th streets. During the celebration, the archway will be revealed, and the community will be invited to walk through the Dupaco Voices Corridor. This will be the only time the corridor is open to the public until construction is complete.

Building remains connected to its roots

The 174,670 square-foot, five-story structure originally was built in 1924 as part of the Carr, Ryder & Adams Manufacturing Company. Dubuque’s Millwork District included the largest makers of windows, doors and cabinetry in the United States.

The Dupaco Voices Archway—which mirrors the Caradco building’s archway across 10th Street—was infilled with cement blocks to serve as a loading dock during the mid- to late-20th Century.

Artist ZorZorZor said she painted the Pink Lady onto the covered archway in 2015 during her first visit to Dubuque. Originally there to support the opening of the Voices from the Warehouse District “Streets” event, she was asked to paint live when another artist was unable to perform. She agreed, drawing inspiration from “the spontaneous energy of how the night unfolded.”

“The Pink Lady, as it became named by the locals, unknowingly ignited change, which transformed the landscape of downtown Dubuque,” ZorZorZor said. “The Millwork District is such a beautiful, historical part of Dubuque, and it is so exciting to be a part of its revival.”

To the artist, the Pink Lady is a tough flower on the wall.

“I get the feeling of an old king or queen spirit—still, strong and unwavering,” she said. “Almost like the building itself—there for years, standing tall and strong, waiting to be revived. And now Dupaco has taken on that challenge.”

Tim McNamara, one of the founders of the Voices art shows, said the collaborative shows positively impacted Dubuque. Visitors changed their perspectives about themselves and their community. That impact, he said, will live on through Dupaco’s arrival to the resurging neighborhood.

“With a broader horizon, people become more accepting of others and what they love,” he said. “This positive change will stay with us and make Dubuque a better place to live, work and play.”

Moving Dupaco’s operations center into the revitalized building will help meet the needs of the credit union’s rapidly growing number of members and employees.

During the past six years, Dupaco has grown from serving 64,000 members to more than 116,000. To successfully serve these members, the number of credit union employees also has increased, though at a much slower pace.

Dupaco will occupy the building’s top three floors, with the first and second floors potentially featuring a mix of retail, entertainment and community space, according to Hearn.

“Beyond giving new life to a tired community treasure, we want the building’s use to best align with other community priorities,” Hearn said.