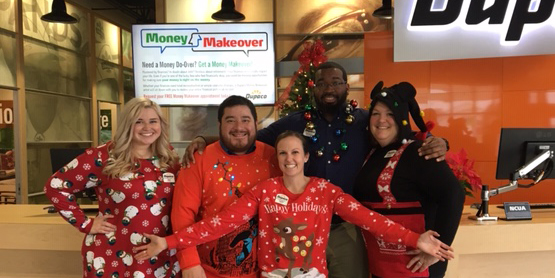 Dupaco staff participate in an ugly sweater contest in 2018 at the branch in Peosta, Iowa.

Systematic saving will pay off for Dupaco members this holiday season.

“When you save throughout the year, it’s a lot less stressful during the holiday season, because your holiday spending money is already there,” said Megan Redmond, branch manager at Dupaco’s Cedar Heights branch in Cedar Falls. “Many times, after members have used the Holiday Club, they increase their savings each year, because they don’t even miss the money.”

The amount saved was the highest in the history of Dupaco’s Holiday Club—and more than $280,000 over last year’s savings. The Holiday Club started in 1954.

The payout came within two weeks of members collecting more than $3.6 million in Thank Use. The campaign pays participating members a bonus cash dividend for using their credit union’s services to boost their financial well-being.

Members traditionally open a Holiday Club in November. Automatic deposits are made into the account weekly or biweekly throughout the year. At the end of October, all savings, plus accumulated dividends, are paid out automatically to participating members.

“The habit of systematically saving money is a core principle of Dupaco,” he said. “Thrift by way of a Holiday Club account, which also earns daily dividends year-round, better prepares members when the holidays arrive.”