Originally built in 1924, the former vacant manufacturing building is located in downtown Dubuque’s Historical Millwork District–the neighborhood where Dupaco was founded. After nearly two years of construction, the building opened to Dupaco employees in January 2021.

“The building’s location allows staff to increase their community involvement—a key employee retention and recruitment attribute for Dupaco,” said Dupaco President and CEO Joe Hearn. “Many people entering the workforce seek to patronize and work for organizations which make a genuine positive impact in their communities. Dupaco is an organization with a mission to improve the economic and social well-being of its members, and the Voices building integrates our employees into the heart of it all.”

Beyond giving new life to a tired community treasure, the revitalization of the Dupaco Voices Building will provide a truly unique space for not only Dupaco employees, but future businesses and retail tenants. And, the newly opened Dupaco Alley illuminates a space for the community for the first time in nearly 100 years.

ABOUT DUPACO COMMUNITY CREDIT UNION:
Dupaco Community Credit Union is a not-for-profit, member-owned financial cooperative. It is dedicated to the financial sustainability of its members, and specializes in customized financial counseling, money advice and education. It offers savings, loans, investments, insurance and wealth management products for individuals and businesses. Dupaco serves residents in 112 counties throughout Iowa, northwest Illinois and southwest Wisconsin. Chartered in 1948, membership totals more than 138,000 with assets exceeding $2.6 billion. Visit Dupaco at www.dupaco.com. 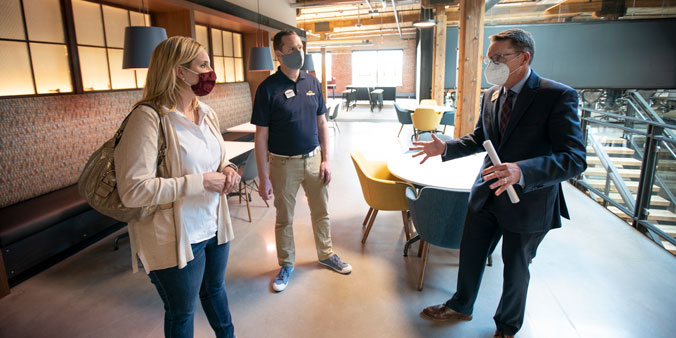 Dupaco President and CEO Joe Hearn (right) and director Andy Schroeder talk to U.S. Rep. Ashley Hinson (R-Iowa) during a May 6 tour of the recently completed Dupaco Voices Building in Dubuque, Iowa. Attendees discussed the economic impact that these historical renovation projects have on local communities. They also shared how credit unions are fulfilling their purpose to enhance the economic and social well-being of members every day. (M. Burley photo)