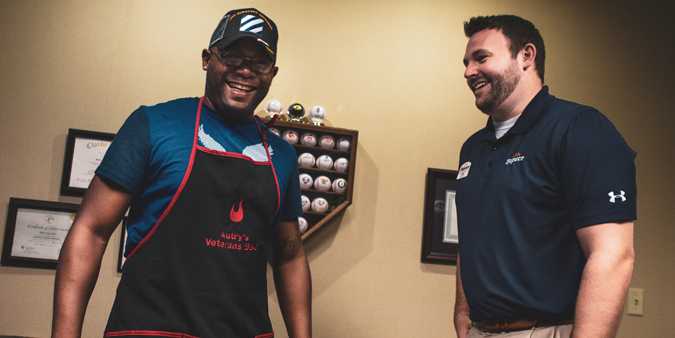 Member Monté Autry, owner of Autry’s Veterans BBQ and Catering Service, visits with Dupaco’s John Heavens on Sept. 19 at Dupaco’s Williams Boulevard branch in Cedar Rapids, Iowa. Dupaco believed in Autry’s dream to start his business and provided him with a loan to do just that. (B. Kaplan photo)

At a young age, Monté Autry was in his family’s rural North Carolina kitchen alongside his grandpa and mom every day, watching and helping them cook. Especially on Sundays.

“My grandpa loved to cook,” said Autry, who now lives in Cedar Rapids. “We had a humongous kettle pot that took four to five people to carry. And we stuck it over the open wood fire and cooked everything from homemade pork skins to deep-fried catfish.”

Autry caught the cooking bug early and has long dreamed about creating meals for others.

One day, he opened up about his dream of being a caterer with Dupaco staff.

Autry shared his idea to start a catering business to bring the soul-food cooking of his childhood to his new home in Iowa. Dupaco’s John Heavens listened—and provided Autry with a loan to do just that.

“There was something about John and hearing him say, ‘I believe in you.’ That’s all I ever needed was somebody to believe in me,” Autry said.

This spring, Autry used the loan to purchase a meat smoker and launch his mobile barbecue and catering service in Cedar Rapids. The caterer prepares everything from ribs to Caribbean jerk wings to homemade macaroni and cheese.

Autry, a single father and U.S. Army veteran, says business has been slow but steady. In time, he would love to open a food truck and, eventually, a small restaurant in the Cedar Rapids area.

“I can go into Dupaco and ask for guidance, not even necessarily to get a loan, and sit down and go over financials,” Autry said. “I have an idea written on paper, and Dupaco is helping me make that come true.”

Dupaco also is helping Autry in his personal life.

He’s been steadily building his credit. His boosted credit score has helped him get into a lower-rate car loan and is setting him on a path to homeownership down the road.

Dupaco gave Autry a shot, and he wanted to thank his credit union the best way he knew how.

In June, he arrived at his local branch with several trays of homecooked Southern food.

“When you get a group of people to believe in you and say, ‘You can do it. How can we help?’ it shows that Dupaco stands for honor, integrity, tactfulness and respect,” Autry said. “Dupaco has been a lifesaver and feels like home.”