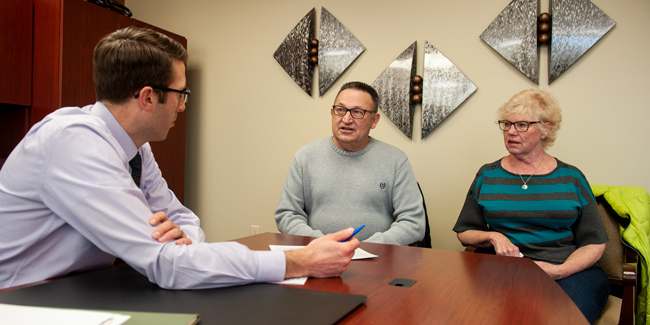 We know we have to save for retirement. But there’s another piece of the retirement-planning puzzle that’s sometimes overlooked: Managing debt.

More people are heading into retirement carrying debt—and more of it—which can diminish the hard work that goes into building that nest egg.

“It’s a tough conversation to have when you do the math and realize you’re mentally ready to retire, but financially you’re not,” said Suzan Martin-Hallahan, CFP®, a financial consultant at Dupaco Financial Services.

“A lot of times, I have to say, ‘You can retire from your career. But you’re going to have to find a part-time job to make ends meet.’”

Need to review your retirement plan? Dupaco can help >

The Employee Benefit Research Institute studied data between 1992 and 2016, and found that American families just reaching retirement or those newly retired are more likely to have debt—and higher levels of it—than previous generations.

Here are some of the study’s highlights:

Housing debt has driven many of these changes, according to the study. Today, more families change homes and jobs more often, Martin-Hallahan said.

“We live a more expensive lifestyle today versus my grandparents’ generation that tended to stay in the same home until they physically couldn’t stay there any longer,” she said.

The Great Recession, between 2007 and 2009, also impacted many retirees. Many of them lost their jobs and experienced losses in their investment balances during that time. Two other life changes that will upset any financial plan are unexpected health care expenses and divorce, Martin-Hallahan said.

“This can create a situation where any previous retirement goals have to be completely reevaluated,” she said.

Calculate how to reach your debt payoff goal with our calculators >

Retiring with heavy debt loads can force you to take on part-time or even full-time employment in retirement.

And it can lead to even more debt.

“When people retire who aren’t financially prepared and don’t change their lifestyle, they tend to lean on credit cards to compensate for having a lower fixed income,” said Dupaco’s Jill Rothenberger. “This leads to an increase in debt and tighter budgets.”

It can also make it difficult to get approved for new loans.

“When people retire and their income becomes fixed, but they have equity in their home, they may not be approved for a loan because of their higher debt-to-income ratio,” Rothenberger said. “It’s typically referred to as asset rich and cash-flow poor.”

Learn how to live debt-smart >

What you can do to prepare

Ensure you’re on the right financial path to retirement by regularly getting a financial checkup—especially seven to 10 years out from retirement.

Everyone’s financial situation is unique, so it’s important to meet with a financial planner to create a plan that fits your needs and goals.

“It’s very, very important to sit down and create a strategy on how to address the current debt and current assets and how that compares to what the income stream will be in retirement, what makes up that income stream and the tax ramifications,” Martin-Hallahan said.

Part of the financial checkup might involve changes to your budget today to help you reach your retirement goals in the future. Cutting unnecessary expenses can help you chip away at that mortgage, car loan and other debt.

“There are definitely strategies available to get a game plan in place,” Martin-Hallahan said. “We just have to take a look at the whole picture and be honest with ourselves.”

Retirement is meant to be enjoyed. Maximize yours by learning how to retire debt-free. Dupaco member (and recent retiree) Chuck Andracchio explains.

If you have already retired or if you can count the number of years until retirement on your fingers, then please heed this friendly warning: Unless you’re already making the most of your current retirement-planning strategies, then it may be…