DUBUQUE, Iowa—Mark DeRuyter moved to Dubuque to help his wheelchair-bound mother. Then his brother moved in.

“I walked into Dupaco one day and walked out feeling like my entire life had changed,” he said.

Houy showed DeRuyter how to address some issues on his credit report and approved him for a small-limit Dupaco Visa credit card.

With the low-interest loan, the money you borrow is secured in your savings account for the term of the loan. You earn interest dividends on the money held in savings while payments to the loan help build your credit. 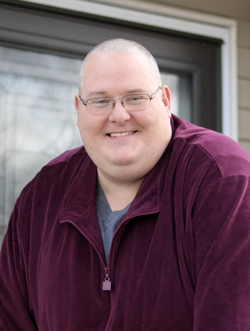 “Mark is like a lot of our members. He’s a really bright guy, and he was very motivated,” Houy said. “He just needed the tools to get moving in the right direction.”

When Houy explained how Dupaco could help, it sounded too good to be true. DeRuyter had always had negative experiences with banks.

“Then I remembered this is a credit union,” he said. “They’re doing what’s best for their members, and that makes a huge difference.”

Six months after his first meeting with Houy, DeRuyter’s score had soared.

And he bought his first house. It’s a four-bedroom, walkout ranch that more than doubled his family’s living space.

The first thing DeRuyter did was build his mom a handicap-accessible ramp.

“Dupaco got me started on the road I needed to take,” DeRuyter said. “I can only see it getting better from here.”

This couple bought their first house sooner than they thought possible, thanks to guidance from their credit union and a financial boost along the way.