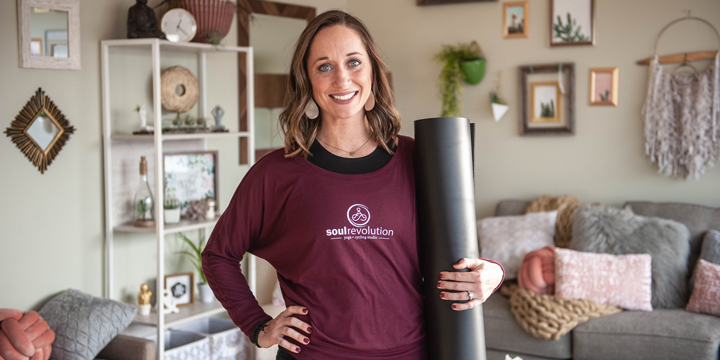 Business owner Ashley Ayala reflects on her journey of opening Soul Revolution Yoga + Cycling Studio in Dubuque, Iowa. Dupaco helped coach Ayala along the way and gave her the financial boost she needed to take the next steps toward making her dream come true. (M. Blondin/Dupaco photo)

A few years after her dad passed away, Ashley Ayala discovered a way she could be at peace. One hour at a time.

The Dubuque woman felt at home when she practiced yoga at a studio while attending the University of Iowa.

“It was the one time during that 60-minute class that I didn’t think about anything but what was happening in that room,” she said. “I was able to shut down the chatter in my mind and give myself some self-love that I didn’t do enough.”

It wasn’t long before Ayala started dreaming of one day opening a yoga studio of her own.

That dream came to fruition at the end of 2018.

Ayala and her husband, Ricky, opened Soul Revolution Yoga + Cycling Studio at Dubuque’s Wacker Plaza. It was the culmination of years of dreaming, months of planning and countless discussions with Dupaco’s business lending department, which loaned her the startup funds she needed.

Ayala’s unique studio combines the benefits of yoga with the cardio benefits of cycling. The studio focuses on building community and practicing balance and authenticity.

“The one thing I found through yoga is that living your truest, most authentic self creates the best version of yourself,” she said. “I truly believe when you are at your best, you’re able to give your best to those around you.”

Ayala knew she would turn to Dupaco to help launch her business. The credit union had been there for her before, helping her understand and build her credit—and, along the way, build confidence in herself.

Ayala began working with Dupaco’s Chad Breitsprecker last year. From the beginning, it was about much more than a business loan, she said. Breitsprecker coached her on opening the business, answered all of her questions and gave her the financial boost she needed to take the next steps.

“I always felt like Chad had my back. He legitimately cared about me and my success,” she said. “And we had fun with it.”

There are many days when Ayala can’t believe her studio has opened its doors.

“There still are no guarantees, and some days I still have self-doubt,” she said. “But over the past couple of days, I’ve had some really nice conversations with members who have come in. I’m taking that deep breath and looking around and realizing this is it. And I couldn’t be more excited.”

Monté Autry caught the cooking bug early and dreamed of preparing meals for others. Dupaco believed in his dream to become a caterer.