It was a month after the Fourth of July when Ralph Freese remembered he had a couple of leftover fireworks. He would end up lighting only one that August 2016 evening.

The firework exploded instantly, taking with it Freese’s left foot and ankle.

“They didn’t think I would make it,” the 55-year-old Wall Lake man says.

So began a series of more than a dozen surgeries over the next several months in an attempt to save the rest of Freese’s leg. Eventually, doctors agreed that an amputation was necessary.

As Freese was being wheeled into the operating room, he phoned his credit union to express concern over paying his Dupaco auto loans while he was out of work. He says it was Dupaco’s willingness to help at every turn that put him at ease and allowed him to focus on getting healthy.

“I wouldn’t be where I am if it wasn’t for Dupaco. I wouldn’t have had a speedy recovery because I would have been stressed out,” he says. “They really stood behind me.”

The day of his surgery last year—and many times since—Freese talked to Dupaco’s Terrie Smentek, a member solutions consultant at the Cedar Falls branch. Smentek told him not to worry about his loans—the credit union would rewrite them to make them more affordable until he could return to work.

Meanwhile, Smentek also looked into whether Freese had enrolled in Dupaco’s accidental death and dismemberment policy through Cuna Mutual, referred to as TruStage, which is offered to members at no charge.

Not only did Freese have a policy—Dupaco’s Carroll branch helped him fill out the paperwork to submit the claim—but he had forgotten he had opted for additional coverage. So instead of a $1,700 benefit check, Freese received a payout of $27,750 in September. He had paid only $576 over the life of the policy.

“Dupaco has lots of way to help members,” Smentek says. “I knew Ralph wanted to fight to keep his vehicles, so I was going to do absolutely everything I could to help him.”

When Freese learned how much money he had received, he nearly fell over. It allowed him to pay off his vehicles and some credit card debt and even purchase a house during the course of his recovery.

The accident put Freese out of work for more than a year. He’s since been able to return on a part-time basis and, thanks to his prosthetic leg, can walk and ride a motorcycle again.

“The whole experience made me feel like I was part of a family instead of a number, and that touched my heart. Dupaco wants to make sure you exceed in life. That’s just what they do,” Freese says. “And I’m going to enjoy my life to the fullest.” 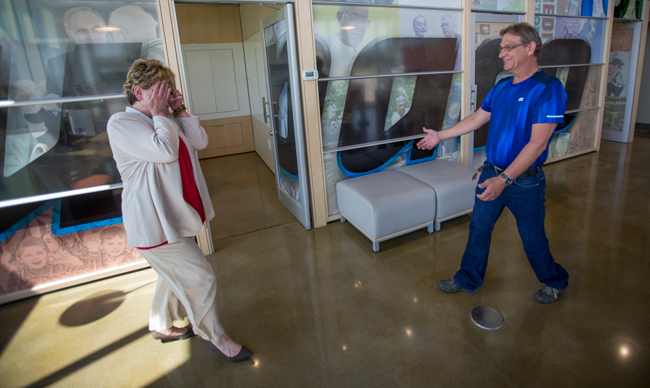