Barry Funke had long been attracted to Dupaco Community Credit Union’s competitive rates. But the Manchester man became a lifelong member after the credit union gave him a chance when no other financial would.

Three years ago, Funke was on his way to work in the early morning hours when he hit black ice, sending his vehicle off a railroad bridge.

The accident left him paralyzed.

Funke remained hospitalized for three months and was unable to work for nearly two years as he underwent physical therapy to regain strength in his legs. While he remains paralyzed, he can now walk with the help of crutches.

It was a necessity, with mounting medical bills making it more difficult to make ends meet. With plans to launch an auto-detailing business, Funke turned to several local banks in hopes of obtaining a loan to cover the upfront costs. Each time, he was denied because he was “too high of a risk.” 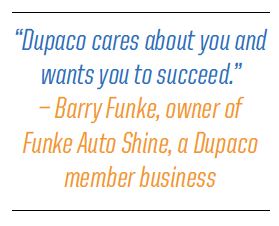 Then someone encouraged Funke to reach out to Dupaco. Manchester Branch Manager Kelly Ruegnitz dug deeper than just his credit score, which had dipped because of medical bills. She crafted a plan to loan Funke the startup funds he needed, using his truck as collateral.

Funke Auto Shine opened its doors in Manchester on April 1.

“I was getting so used to being told no. It was huge that Dupaco was willing to help,” Funke said.

At Dupaco, he knows he’s more than a number.

“Dupaco cares about you and wants you to succeed,” Funke said. “I’m just very thankful to be alive and to have people who are here to help me. I owe them a lot.”